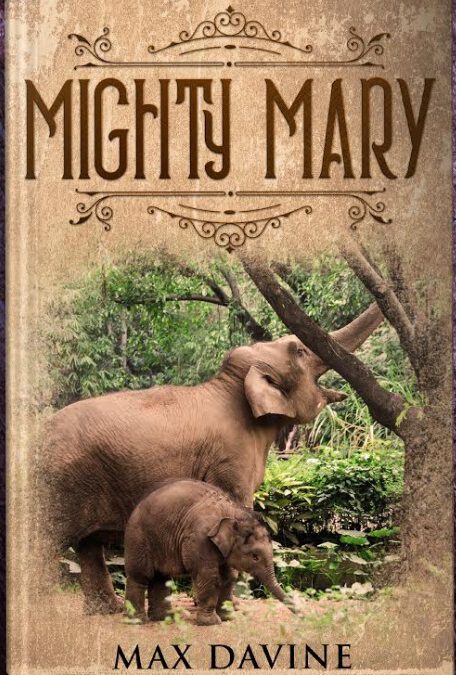 Mary was a circus elephant. The Star of the West. She could dance, play the trumpet and pleased crowds wherever she went.
In 1916, after a disastrous Wild West show in Erwin Tennessee, acts against Mary the five-ton Indian elephant would go down in history as one of the most disturbing and bizarre cases of animal cruelty the world has ever seen.
But, Mary had a life before the circus. She was free once. Part of a wild herd.
During the British Raj, she was captured, trained and sent to America to become a spectacle. Along the way, she loved, she lost, she made friends and formed bonds. She suffered heartache and experienced ecstasy. She was a living being.
This is her story.

Max Davine’s Mighty Mary tells the story of the real-life circus elephant known as Mighty Mary. Born in the wild, she is captured by humans when her mother is killed for ivory. Once acquired, Mary is subjected to horrific cruelty, as circus elephants typically were in the early 1900s. But Mary remains stalwart in her belief to please the humans and avoid pain by not harming those who have wounded her. She even goes so far as to find friends among humans who give her a place to belong.

But when old human habits return, Mary will be pushed beyond her limits, and not even her new friends can stop what comes next. In Mary’s world, the good guys aren’t always who you think they are, and the allies are those who are the most broken.

Mighty Mary is a heart-rending tale that rings all too real with what elephants suffered in performing shows. Their training and treatment should disturb everyone. Davine paints this treatment vividly, and with his use of Mary’s perspective, this becomes even more visceral. The misunderstanding between animals and humans is a critical point of this story. Everything hinges on how misunderstanding and fear, on both sides, leads to needless suffering and hurt for all involved.

There is stunning depth given to the inner lives of the elephants. It made me curious to know more about the role that research played in writing the book. I’d hoped for some insight from an author’s note, but no such note appeared at the end. This was disappointing as Mary is such an interesting figure, and I’d been looking forward to a behind-the-scenes of her story.

Writing a story from an animal’s point of view is an ambitious project. Davine pulls it off quite well, though it does end up anthropomorphizing the animals a bit, though that would be hard to stay away from inherently. As a result, the animal characters and their experiences are more fully realized than some of the human characters. The humans can come across as one-dimensional when compared to the complexity of Mary. Still, the story is enjoyable, even though it is an emotionally brutal experience. The author keeps tight control of a highly emotional book, and tells an amazing story of an amazing elephant.

Is brutal on reader emotions, but this is a well-told, interesting story that explores the line of brutality and kindness, fear and suffering, and it can cause us to question our own relationship to the animals around us and how they might see us.

Max Davine was born in a suburb of Frankston, Victoria in 1989. He began writing dramatic pieces throughout highschool, and upon graduating set off to Los Angeles to learn the art of writing and pitching screenplays. Returning the same year, he went on to study acting with Peter Kalos at the Melbourne Actor’s Lab from 2010 to 2012, the year his first novel, “Terra Domina”, was published by ASJ Publishing. As well as novels, he has written for the stage and screen.