The Last Lumenian by S.G. Blaise 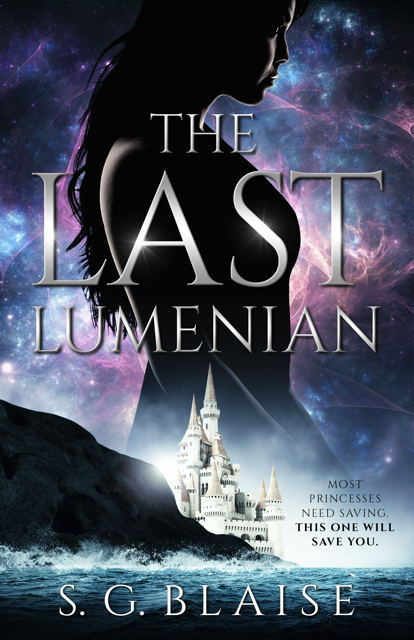 She is a rebel. Lilla is fighting for the refugees’s freedom from oppression. The king, her father, lost touch with reality ever since Lilla’s mother died. Now everyone else is paying the price.

The arrival of Callum, a powerful Teryn general, complicates Lilla’s life. His presence leads to conflicted feelings and friction with Arrov, a handsome pilot and fellow rebel.

Her life is not what she imagined it to be. Not by far. Meddling gods, love interests and sudden magical abilities have no room in Lilla’s world, but that has become her new reality. No matter how hard she pushes them away, it’s too late. They all seek to control her anyway.

Now the Era War between two ruling archgods forces Lilla to act: accept who she really is magic and all; find true love; fulfill her destiny by defeating the Archgod of Chaos and Destruction before He finds her. The Last Lumenian.

A rebellious princess discovers magical abilities that help her take on a powerful enemy in this debut fantasy.

As the king’s daughter, 17-year-old Ma’hana Lilla of the planet Uhna is expected to obey. But Lilla strongly disagrees with her father’s policies, which keep refugees imprisoned in squalid camps even though Uhna is immensely wealthy thanks to mastering technology that’s combined with elemental magic. Lilla joins the rebellion, but events become complicated when Callum a’ruun, a general with the Teryn Praelium, arrives with a delegation. They’re seeking assistance from the 19 worlds of the Pax Septum Coalition, which Uhna leads. Although the Archgoddess of the Eternal Light and Order prevailed last time in the era wars, the Archgod of Chaos and Destruction is again gathering an army of corrupt fiends and servants. Besides politics, Lilla struggles with panic disorder, grief over her mother’s early death, and alarm over the control her new, young stepmother wields over the king. Callum is both irritating and attractive, complicating Lilla’s relationship with Arrov, a pilot who’s joined the rebellion. But all these local and personal difficulties pale beside the undeniable call of Lilla’s true nature, her untapped magical abilities, and her essential role in combating the Archgod. In her novel, Blaise deftly blends Lilla’s approachable, young present-tense voice with sophisticated worldbuilding, seen even in minor details. For example, guards still wear cutlasses because Uhna was founded by pirates, and Lilla’s island home is reflected in her favorite expletive: “Buckets of fishguts!” The plot’s many disparate ingredients—romance, war, politics, magic, technology, family tensions, theology, psychology—meld in a deliciously hearty bouillabaisse, helped by intelligent exposition, surprising revelations, believable conflicts, and strong character development. Everything builds to an exciting, dramatic, and satisfying conclusion.

S.G. was born in a faraway land of castles, monarchies and fallen dictatorships. Hollywood movies were forbidden under the Soviet oppression during her childhood, but her dad smuggled them in anyway, risking his life so that his children could experience the magic and hope inherent in those stories. She watched rebellions unfold in real time. Journeyed across the Atlantic Ocean for love. She ended up in sunny California, where she is living her dream – writing stories and annoying family members.